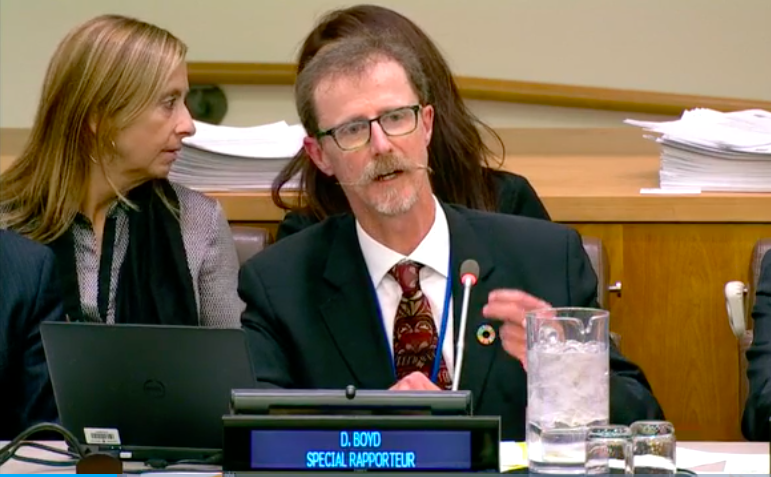 The United Nations General Assembly is expected to vote on a draft resolution recognizing the human right to a clean, healthy and sustainable environment, in late July.

Costa Rica, the Maldives, Morocco, Slovenia and Switzerland presented the draft text to the 193-member Assembly, the UN’s most representative body, last June, following the landmark resolution adoption of a similar text adopted in October 2021 by the UN Human Rights Council.

But why is it important for the wider UN membership to recognize this right? And what will the adoption of this resolution mean for people around the world?

UN News spoke to the UN Special Rapporteur on Human Rights and the Environment, Mr David Boyd, and asked him about these and other questions.

One of the biggest threats to our oceans is man-made pollution. Excerpt:

So, what action is going to be taken by the General Assembly?

There will likely be a vote on recognition of the Right to a Clean, Healthy and Sustainable Environment. This right that was not included in the Universal Declaration of Human Rights back in 1948. So, this is really a historic resolution that will change the very nature of international human rights law.

Why is it important for countries to vote ‘yes’ on this resolution?

It’s important because in the face of the triple environmental crisis we’re facing – rapid climate change, the loss of biodiversity and pervasive toxic pollution that’s killing 9 million people every year – we need transformative changes to society, we need to quickly shift to renewable energy.

We also need to shift to a circular economy, and we need to detoxify society, and the right to a healthy environment is one of the most powerful tools we have to hold governments accountable.

General Assembly resolutions are not binding, meaning countries don’t have a legal obligation to comply with them, so how could they be held accountable?

We have a track record that we can look at where in 2010, the General Assembly passed the resolution recognizing for the first time that everyone has the right to water and sanitation.

That resolution similarly was not legally binding or enforceable, but it was a catalyst for a cascade of positive changes that have improved the lives of millions of people.

This is because countries responded to that resolution by changing their constitutions, their highest and strongest laws. So, Costa Rica, Fiji, Mexico, Slovenia, Tunisia and others did that. And most importantly, States really made it a top priority to deliver on fulfilling their obligations to provide people with clean drinking water.

So, for example in Mexico, the Government has not only recognized this right in its Constitution but has worked with rural communities to provide safe drinking water to over 1,000 rural communities in the last decade.

Canada has also worked with indigenous communities to upgrade water and sanitation infrastructure and more than 130 communities in the last decade.

So, these resolutions may seem abstract, but they are a catalyst for action, and they empower ordinary people to hold their governments accountable in a way that is very powerful.

The Human Rights Council adopted the right to a healthy environment last year, have you seen any changes at national levels since then?

I think there have been some positive developments. Certainly, the right to a healthy environment is being talked about more than ever before.

There are countries that are starting to incorporate it into their legal systems and there are tons of people at the grassroots who are using this right to argue that their government should be taking stronger climate action, cleaning up their air quality, and taking better care of biodiversity and ecosystems.

It’s not an overnight effect, but we’re already starting to see some early dividends.

What is your call for countries before the vote?

Would a country vote ‘no’? Are there challenges to implementing this resolution?

Countries have different challenges. So, there’s some countries that have a very conservative perspective about human rights.

There are other countries that are major oil and gas producers who perhaps have some fears about the implications of recognizing this right – so, those could be some of the nations struggling with whether they will be able to support this resolution.

Why should the right to a healthy environment be recognized as a universal human right?

So many people’s lives around this planet are affected by the climate crisis and environmental degradation. Literally billions of people today are breathing air that’s so polluted it’s going to reduce their life expectancy by years.

And the reality is that we need a safe and livable climate in order to flourish as humans.

What will you do if the resolution passes?

Oh! I’ll be jumping up and down with excitement. I’ll be so happy and just absolutely thrilled about the way that this is going to increase and improve people’s quality of life all over the planet.

COVID-19: WHO updates strategy, to vaccinate all health...