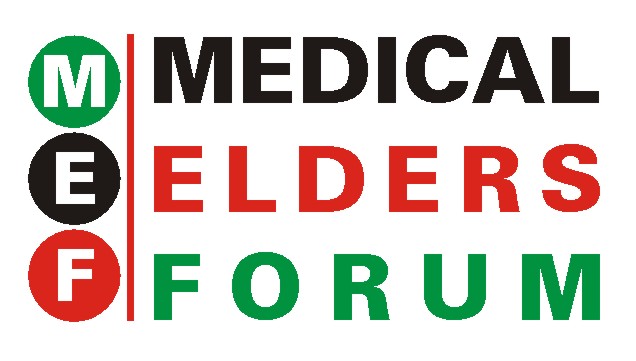 Elders in the medical profession in Nigeria under the umbrella of Medical Elders Forum (MEF) had on Thursday converge in search of solution to the numerous challenges bedeviling Nigeria’s health sector.

It was a memorable day for the elders, as they did not shy away from exploring, unearthing and saying the true situation no matter how bitter and ugly it is.

Even as the major part of the meeting was held behind closed doors, at least, during the opening session that the media were allowed to be part of it, the truth began to surfaced.

This was an indication that the closed-door session was going to be stormy and workable solutions will be arrived at.

Trust elders, they don’t pretend, no diplomacy, and no fear. They say it the way the feel it no matter who it affects.

The Coordinator of the Africa Health Budget Network (AHBN), Dr. Aminu Magashi Garba, set the tone rolling in his submission during the welcome address.

He emphasized that, the world over, for any health system to deliver qualitative and efficient services to its people, there must be strong political commitment and what he described as effective health system governance.

He also reiterated the need for adequate healthcare financing, motivated human resources for health, effective regulation and legislation and a strong and vibrant private health sector for the health system to perform optimally.

To achieve all these and ensure the socio-economic and political growth and development of the nation and its health system, the medical and dental profession, he emphasized, was critical and key.

“Association like the NMA serve as watchdog of government and through constructive engagement with the government help to deliver quality and smooth health care delivery to the Nigerian population,” Dr Magashi said.

In his keynote address, on the theme: Medical Profession: A look into the past, present and future, the Emir of Shonga, HRH. Dr Haliru Yahaya, lamented that there is too much fragmentation in the health sector.

While recalling the past, he noted that strike actions were not necessary in the health sector, because, according to him, during his time in the practice, he rarely advocated and supported strike action.

He also lamented what he noted as over specialization and rivalry which he said were among the factors frustrating the growth of the health system and therefore, charged the elders in the medical profession to  come together and nurture younger ones in a manner that they will conduct themselves with the interest of the nation at heart.

He called on the NMA to use its powers to address the fragmentation in the profession.

The NMA President, Prof. Innocent Ujah, on his part, painted a picture of the challenges the medical doctors were facing in Nigeria.

According to him, medical doctors whom he described as ‘the most intelligent set of people’ were not being treated fairly and appreciated by Nigerians.

“Everybody is envious of the doctor, what is the problem? What have we done? Is it a sin to be intelligent? By the way we are the most intelligent.

“Circular from Salaries and Wages Commission is coming out that no more CONMESS for doctors who are lecturers but it is there as a circular so why is the doctor singled out? In Lagos State University, a doctor with fellowship cannot contest Vice Chancellorship.

“We have written from the Medical and Dental Council of Nigeria (MDCN) to tell them to stop that, if they don’t, we will challenge it because we cannot take what we are seeing,” Prof Ujah said.

He added that some circulars from the National Universities Commission (NUC) are contradictory and need to be sort frontally to see the dismemberment. “These are the things that cause problems for us. When we try to solve some issues, other issues crop up.”

“We need support from our elders; people value us but we don’t value ourselves. We should be able to resolve our conflicts and those who are in government should know that they are doctors, you will come back to us,” he reiterated.

The Minister of Labour and Employment, Dr Chris Ngige, was among the elders who attended the meeting. He spoke, as usual, in his characteristics nature, without looking at faces or playing with words.

He raised the concern that the medical profession was in danger and that there was urgent need for the elders to, as a matter of urgency, rise up and salvage the situation.

While noting that there could be pear envy against the doctors, he urged them to be humble and carry themselves with dignity, rather than try to play God or compete with God.

He said: “At no time in the history of NMA and the medical association am I seeing our association and our profession in danger as I am seeing now. Many people will not see it but from where I am sitting and standing, I can see danger ahead.

“We are one of the oldest professions on earth metamorphosing from natural and traditional healers to take away pain from people and consequentially save lives. We don’t create lives, God creates, we only preserve people’s lives through the act of God. In doing so, God has given us some powers and those powers are near his own to create.

“But there is something God does not want; God does not want when he gives you powers you use it to try to say that you are like him or you are competing with him. God loves you to do that which he has asked you to do; to use that power with humility.”

Dr Ngige challenged doctors to ask themselves why it is only when their colleagues are in government, that they go on the greatest number of strikes.

“Some of these colleagues were Presidents, Secretary Generals of NMA and even NARD. Dr Onyebuchi Chukwu, Dr. Isaac Adewole faced plenty of strikes, since our government came, I have consolidated four strikes something is wrong. We need to ask ourselves some questions and be straightforward with the answers

“We must start by telling ourselves the truth. You say they dislike doctors what did you do while they disliked you? Yes there is peer envy, yes some wanted to study medicine and they couldn’t we know it and if you know it, you carry yourself with dignity and humility,” he advised.

While the communique from the meeting is being awaited, it is pertinent to say that the key to a peaceful and stable health sector is, no doubt, in the hands of the Medical Elders Forum.

They must use their position as both elders of the medical profession and among the elders of the nation to find a lasting solution to the endless, needless and embarrassing crisis in the health sector.