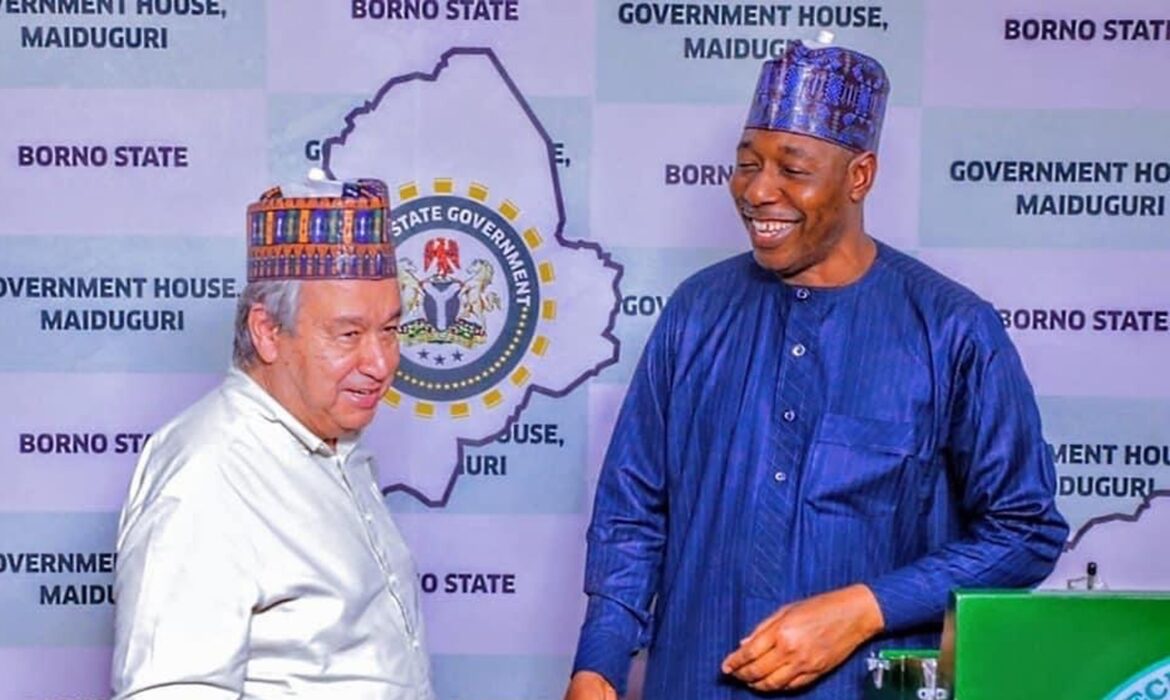 The “enormous challenges” faced by the North-eastern Nigerian state of Borno, which include a continuing terrorist insurgency, need to be recognized by the international community to create “state of hope and a state of reality,” United Nations Secretary-General, António Guterres said.

Gutterres said the call became imperative in a region which he said did not live up to its reputation for “terrorism, violence, displacement or despair.”

He made the remarks after visiting a UN-supported reintegration centre for children who have been involved with armed groups, in Maiduguri, the capital and the largest city in the state.

Borno State has been one of the epicentres of violent extremism and terrorist activity in Nigeria and across the wider Sahel region.

Insecurity over the past 12 years linked to armed groups, including the terrorist group Boko Haram, has disrupted livelihoods and led to the displacement of some 2.2 million people, according to UN figures.

The UN chief visited the Bulumkutu Interim Care Centre, which opened in June 2016.

The transit centre has provided shelter, protection and other lifesaving services to 7,036 people, including 4,018 children (2,756 boys and 1,262 girls) in preparation for reintegration back to their communities.

Many of these children were forced – or chose, through a lack of other opportunities – to join terrorist groups and take up arms as combatants. Some were taken into detention and then released after being suspected of involvement in violent acts.

At Bulumkutu, they are being given a fresh opportunity to start a new life as a local religious leader Imam Mallam Abba Bilal Goni explained. “We established a repentance and reward programme as part of the reintegration process. We provide education and job training, so these young people and can have a future.”

After meeting a group of children, Mr Guterres said: “I was amazed to see today in the centre that those that have been terrorists, want to integrate in and contribute to society. The policy that is in place here is a policy of reconciliation and reintegration.”

Terrorism and the violence and insecurity it has brought to communities not just in Nigeria but in many neighbouring countries is one symptom of a complicated mix of overlapping crises.

Changing climatic conditions, including lower rainfall, have led to competition and sometimes conflict over limited resources; deforestation and overgrazing have further denuded the environment which the largely nomadic peoples of the Sahel rely on to survive and has led many of them to migrate to different areas, putting pressure on already stretched basic services, such as health and education. Thousands of schools have been forced to close, mainly due to insecurity.

The UN says that humanitarian needs in northeastern Nigeria continue to be large-scale, compounded by the COVID-19 pandemic and deteriorating food security situation, due to the challenges farmers face both growing and selling produce.

The humanitarian response plan for Nigeria calls for US$1.1 billion to assist those people in need in the north-east of the country and is currently only 8.7 per cent funded.

The cost of humanitarian operations has recently risen, partly as an effect of the war in Ukraine, with the price of diesel increasing by 52 per cent from the period prior to the crisis, while fertilizer prices have increased by nearly 49 per cent.

Mr Guterres said it is “absolutely essential to understand that, in a situation like this, it’s not enough to provide humanitarian assistance.

He added that the international community needs to support “not only a state of hope, but a state of reality, in which there is no room for terrorism.”