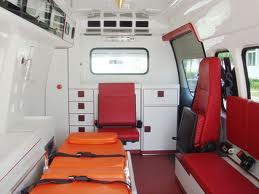 As part of its plans to strengthen Bilateral relationship with Nigeria, the Chinese Government Friday donated 12 ambulances to the Nigerian government as part of its support, for disease response. Accepting the ambulances in Abuja, the federal health ministry’s permanent secretary Linus Awute said the ambulances will be very useful to Nigeria as possible Ebola outbreak remains a threat to the country.

Awute said, “We have contained the disease, but we have men and women we have sent to countries still trying to contain Ebola. Should they come with [signs], what do we do?”

He said the ambulances should help boost Nigeria’s preparedness for any kind of disease of the Ebola nature. It is the summation of what’s expected to be a complementary element of a standard holding centre. Before now we were just having a holding centre, but we felt there must be some complementary facilities. We have started first by building an isolation centre and now with an ambulance, I think that’s what will make a standard holding centre and we should be celebrating that we have bit now,” Awute said.

A Police transit camp at Kuje for holding force volunteers working in Ebola-affected countries is among 11 centres equipped with an ambulance by the Chinese government. Another ambulance was given to the Nigeria Centre for Disease Control and nine to federal hospitals. Earlier the Japanese government had donated an Ebola holding facility to the Nigerian government through the Nigeria Police force. The Holding Facility is also being fitted with an isolation unit for quarantining and monitoring any returnee possibly infected with Ebola, but has not had a complementary ambulance until now.

Chinese ambassador Gu Xiaojie while handing over the keys to the Nigerian government, said health was important to the bilateral relations between Nigeria and China.
“We uphold the efforts of Nigeria and the people to contain Ebola but we also appreciate the efforts of the Nigerian government to lend support to other Ebola-affected countries in West Africa… and we are going to push closer cooperation between Nigeria and China,” Gu said.

Teaching hospitals to get ambulances include those attached to University of Ibadan, University of Port Harcourt, Nnamdi Azikiwe University, University of Jos, University of Maiduguri and Usman Danfodio University. Other federal hospitals are Federal Medical Centre, Lokoja, Federal Teaching Hospital, Abakaliki, and National Orthopaedic Hospital, Kano. Only 11 of 12 ambulances donated were given out on Friday. The last was damaged in a crash in Kogi State during delivery from Lagos to Abuja.

May 29th ; President Buhari please speak out on Health