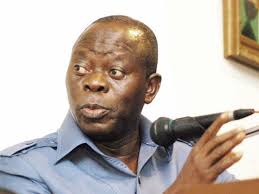 Governor Oshiomhole said the project was commendable as development partners had been collaborating with the state government toward ensuring that women and children were healthy.

Represented by the Secretary to the State Government, Professor Julius Ihonvbere, the governor said that the project would benefit the under-five population in the state, and urged stakeholders to ensure its success.

The acting National Leader, Technical Assistant Team of the EU-SIGN, Abuja, Madam Amenata Sidibe, said the project was a continuation of the EU support to the health sector in Nigeria.

According to her, the project is aimed at improving the quality of immunisation services delivery in Nigeria and it will contribute to the reduction of childhood morbidity and mortality rate in the country.

She said: “The project is currently operational in 23 states and the Federal Capital Territory and will be implemented at the state level through the State Primary Health Care Development Agency or State Ministry of Health.

Madam Sidibe, who was represented by Salihu Nasir, a member of the team, said that the project did not request counterpart funding from states but optimal political support from the state governments.

She, however, appealed to the Governor of Edo to ensure full establishment of the State Primary Health Care Development Agency before his handover through the appointment of board members, provision of office space and transfer of Primary Health Care staff to the board.

She urged all partners in the state to support the Ministry of Health to effectively run the vaccine distribution system.

He said that the project would undertake new construction and rehabilitation of cold stores through the supply of Direct Drive Solar Refrigerator (DDSR), 4×4 drive vehicles and computers.