Rajiv Shah to step down as USAID administrator 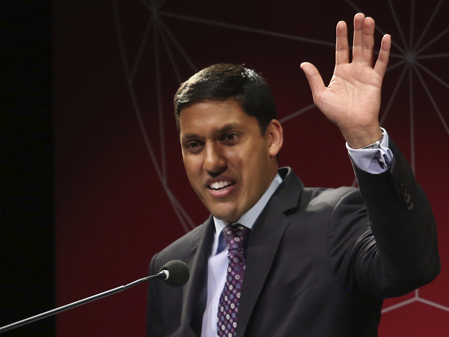 Rajiv Shah will step down as U.S. Agency for International Development administrator in February next year.

The announcement comes nearly five years after Shah first took office and after months of rumors and speculation that he might be moving on from the agency. To do what, is anyone’s guess — and plenty have tried to make predictions. Many have speculated that Shah might run for public office, and a flurry of Indian press outlets briefly suggested he was in the mix to be the next ambassador to India.

With Shah’s departure from USAID, the White House will consider candidates to replace him. Barring a new appointment, Deputy Administrator Alfonso Lenhardt would step into the role of acting administrator until a permanent administrator is nominated and confirmed. The process leading to Shah’s appointment took almost a year.

Lenhardt, a career military officer, previously served as ambassador to Tanzania, and has stated that his primary focus at USAID will be to improve management processes and institutionalize the reforms and initiatives that Shah’s administration has put in place.

Shah traveled to Haiti this weekend — a fitting bookend to his tenure as administrator, since one of the first challenges he faced at USAID was to manage the U.S. response to the catastrophic earthquake in the Caribbean country, which struck Jan. 12, 2010, and killed more than 100,000 people.

Shah signed a partnership agreement between USAID and a local Haitian affiliate of the organization Partners in Health, which was co-founded by health luminary and former USAID administrator candidate Paul Farmer. Shah reportedly met with Farmer, who was also in Haiti this past weekend, according an interview he gave to Devex last week.

Shah’s tenure has been defined by a massive reform agenda — USAID Forward — which has sought to better position the agency at a time when money to developing countries increasingly comes from the private sector, not official donors. Shah has focused on partnerships with corporations and universities and has sought to find avenues for innovators and entrepreneurs to collaborate with and transform U.S. development programs.

● The evolution of the USAID administrator
● Rajiv Shah’s career plans after USAID
● USAID denies Raj Shah ambassadorship rumor
● Is this the next leader of USAID?
● Ending extreme poverty with a new model of development

Shah’s efforts to direct more USAID assistance through local organizations in developing countries and directly through government ministries have rankled many of the agency’s traditional implementing partners — the nongovernmental organizations and consulting firms that bid on agency grants and contracts — which have, in the past, felt slighted by Shah’s rhetoric and policies. USAID staff have also expressed frustration with a management style that seems to add new priorities by the day and demand change at a pace some find unreasonable within the context of a large government bureaucracy.

Still, many praise the aid chief’s leadership and his success in rebuilding the public reputation of an agency many thought was fighting for its life. At the beginning of Shah’s tenure, some questioned whether USAID might be absorbed into the U.S. Department of State, given the various authorities over budget and programming the agency had been forced to cede and the huge reductions in staff size.

Under Shah, USAID has played a leadership role in Feed the Future, U.S. President Barack Obama’s global food security initiative, and Power Africa, a multibillion dollar commitment to facilitate energy development on the continent. Shah has also established the Global Development Lab, a hub for innovation inside the agency that is meant to help cultivate open-source solutions to major development challenges from nontraditional partners like tech innovators, engineers and universities.

“Today, we are better positioned than at any other time in our 53-year history to solve the greatest challenges facing humanity,” Shah wrote in a statement Wednesday. “I am especially grateful for friends on both sides of the aisle who have embraced this new way of working — enabling us to recapture our budget, diversify our community of partners, bolster our emphasis on science and technology, and hire more than 1,100 new staff, from investment bankers to Silicon Valley innovators to world-class scientists.”

Shah was this year’s honoree at the U.S. Global Leadership Coalition tribute dinner, where Republican Sen. Lindsey Graham of South Carolina spoke about the need to continue Shah’s effort to rebuild foreign assistance programs and the budget accounts that support them.

Prior to leading USAID, Shah served as director of the agriculture development program at the Bill & Melinda Gates Foundation.