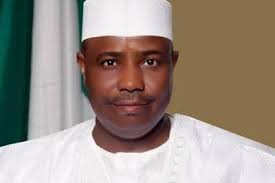 A statement signed by his Spokesman, Imam Imam, said the directive was given after an unscheduled visit to the hospital by the governor, who found facilities there in an appalling state.

According to the statement, facilities at the hospital were found to be completely run down, with structures mostly dilapidated.

It was however learnt that patients on admission at the hospital had been moved to other public hospitals in Sokoto for proper attention.

The statement also indicated that the governor had ordered for an assessment of facilities at the hospital, for immediate upgrade, adding that once the upgrade was completed, the government would convert the hospital to a renal and cardiac centre.

In another development, Imam said governor Tambuwal’s administration had from January to May this year, spent about N50 million on the purchase of free drugs to treat indigent patients in the state.

He said the money was spent through State Zakat and Endowment Committee, under the Ministry of Religious Affairs.

“We deposited the funds in selected hospitals and pharmacies to provide drugs to all those who could not afford to buy. It is one of the social intervention programmes of the government and so far, it has proven to be hugely successful,” the statement read.