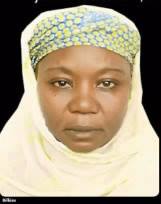 It was Asmau Ahmad my executive assistant and a niece to Hajiya Bilkisu Yusuf who 1st informed me that Bilkisu Yusuf had passed away via a BBM message. It was in the early hours of Thursday 24th September 2015 as I was in New York participating in the 70th session of the United Nations General Assembly (UNGA) and the UN Sustainable Development Summit. I received the news in shock and quickly replied her “was she in any accident or sickness that I wasn’t aware of”. She replied that she died in Mecca during the stampede.

Auwal Musa Rafsanjani the Executive Director of CISLAC reminded me that “no one could claimed ownership of Bilkisu Yusuf as she had impacted in the lives of many both locally and internationally”. A report in Daily Trust revealed that “Hajiya Bilkisu was the most prominent female journalist from Northern Nigeria for several decades. She was editor of Sunday Triumph in the early 1980s and became editor of the New Nigerian in 1987. She then became editor of Citizen Magazine in 1990.”

I knew Hajiya Bilkisu Yusuf for a long time before knowing her closely, of course via her writings. In 2002 as a potential grantee of the Fund for Leadership Development of MacArthur Foundation, I was asked to visit her as my proposal was sent to her to review and give me comments that I would use to present a final proposal for consideration by the foundation. I met her one afternoon in the building that used to host Citizens Magazine. We had about almost 2 hours meeting. She gave me a cogent review and inputs which I found useful for a final proposal writing.

In April 2012, six Nigerian civil society organisations working on MNCH participated in a MacArthur Foundation Accountability Retreat in Mexico, learning about how Mexican organisations engaged with their government and the kind of policies that promoted accountability. I, Late Bilkisu Yusuf, Auwal Musa Rafsanjani were among the team selected and participated in that retreat. Upon return we brainstormed among ourselves and with wider stakeholders including international development partners and establish a national coalition to strengthen accountability for MNCH in Nigeria by name “Accountability for Maternal, Newborn and Child Health in Nigeria, AMHiN.”

One of AMHiN’s achievements has been to enable the strong and coordinated participation of Nigerian civil society in the leading global accountability mechanism for MNCH: the Commission on Information and Accountability (CoIA). Set up in 2011 to support the implementation of the UN’s Global Strategy for Women’s and Children’s Health, CoIA specifically recommended that “all countries establish a national accountability mechanism that is transparent, inclusive of all stakeholders, and recommends remedial action”. The WHO supported the implementation of this recommendation by setting up Country Accountability Frameworks (CAF) workshops, to review each country’s MNCH outcomes, transparency and accountability processes. When the Nigerian Federal Ministry of Health indicated they would organise a national, follow-up CAF workshop in 2013 to finalise their scores, AMHiN recognised a perfect opportunity to strengthen accountability.

Before the workshop took place, AMHiN mobilised its members and other interested CSOs to brief them on the purpose of the CAF, share evidence on the country’s performance in relation to each of the indicators, and agree internally on suitable scores. It also influenced the organisers to greatly increase the number of CSO attendees from the 3 originally invited to 7. Armed with evidence and a collective message, the CSOs dispersed themselves across the different thematic groups and strongly influenced the baseline assessment scores that were agreed by all the participants.

In December 2014, former President Goodluck Jonathan signed the National Health Act into law. Prior to that AMHiN had organised meetings, influenced newspaper articles and features and organised women’s rally in Eagle Square calling on former president to pass the bill in to law. In April 2015 AMHiN mobilised 22 groups and developed a technical policy paper that was used to engage President Buhari’s Transition Committee. The paper advocated for universal access to basic health services for all Nigerians, a functional primary health care system under one roof , a renewed focus on prevention, and greater government spending at all levels to reach the Abuja Declaration targets as well as achieve  $ 86 health spending per capita. The submission of the paper was done face to face at a meeting with the Transition Committee in May 2015 prior to the swearing in ceremony.  AMHiN was glad that Social Issues Sub-Committee on Health’s final report to the Transition Committee included some of the issues in the technical policy paper.

It wasn’t easy to engage the transition committee directly. It was Bilkisu that took me to one of the key committee members Alhaji Hayatuddeen to secure a date for our session. At a later date  Mrs Toyin Saraki provided another push, but when the date was fixed to make presentation, Bilkisu Yusuf humbly declined to be part of the team “please Dr Magashi assemble a 5 member AMHiN delegation  go and present our position, I have done my part, no need to be there physically”. That was Bilkisu Yusuf, always humble and simple. Today AMHiN is set to support the establishment of a quarterly accountability dialogue in Nigeria between CSOs, Government and Media capable of changing the face of accountability in health sector. She wasn’t only a founding member but the Chair Board of Trustees of AMHiN. May her soul rest in peace.

World leaders agree: We must close the Gender Gap