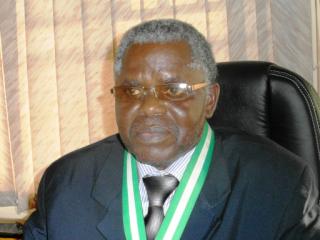 HR; You talked about how Doctors have been in the front-line in war against Ebola and other infectious diseases,  the NMA happens to set up a special national committee, you also talked about an endowment funds from which some financing could be taken to fund the war against Ebola, where do all these fit in for national response for Ebola?

I would say perfectly, because when you are advising Government to do something, we are actually doing is to pre-empt government, they do these things once you give them signal that this is what should be done. Definitely NMA cannot provide the equipment that can be distributed all over the country, but if we pick on a particular area and supply them with equipment, we can then call on the government to see what we are doing with that, so that they can decide to swing into action and then we move together. So that is our own way of making government to look in that direction.

HR; Have you ever thought of the possibility that government may see that and sit back and watch, or decide to go on its way?

No we expect them to do it the same way we are doing it, the treatment, the precautionary measures and the prevention against Ebola is the same everywhere in all level. Being the profession that is supposed to lead with example in the medical sector, we expect that government will follow whatever prototype we are trying to put in place.

HR; Amongst the planned actions that are proposed by the NMA national committee against Ebola, is to produce regularly a revised standard protocols for medical and health emergencies for Ebola and other infectious diseases, how different would this be from what is presently on ground?

Reversing protocol depends on circumstance at that time, if the position remain the same then there will be no need of reversing protocol. If for another 100 years the situation remains the same there will be no point reversing it, but if the situation changes the protocol will be readjusted, drafted to respond to the changes. For now for example, if you have protocol on ground, and you learn of another possible Ebola outbreak somewhere in Nigeria, then we have to revive the protocol for us to tackle it and if there are reports that some strangers have again enter our country with Ebola, then we already know how to respond immediately, so the protocols could be modified according to situations that are on ground at that point in time.

HR; Beyond Ebola, there are other hemorrhagic fever that Nigeria has been dealing with, that are considered endemic, like lassa Fever, and Dengue Fever,  Yellow Fever, do you think the present protocol will satisfy what the government would need in dealing with these infectious diseases?

HR; Nigerians seem to be a bit relaxed again, after the World Health Organization said Nigeria is Ebola free, will the NMA also try to re awaken that consciousness that Ebola is still very much around, being that African countries are still battling with it?

What we are doing is war against Ebola, it encompasses, prevention, precaution and to telling people not to relax totally and to think now that the problem is over. It is not over yet, we must all be on the alert, because that is the only thing that can save this country. The essence of mounting up this campaign is because we know that people may want to relax, by doing so we can keep Ebola far from Nigeria. If we relent by not checking the temperature of those who are entering this country, many people with Ebola can just come in to the country and it will be difficult to trace them. So we have to step up all the precautionary measures and people will learn how to live with those precautionary measures in mind. We must continue to wash hands with soap and dry it and realize that all the symptoms of Ebola should be reported immediately.

HR; You said the NMA will not be going on strike again if your bargains with government is given full consideration,  being that the NMA was on strike at the wake of the Ebola outbreak, are you trying to make up to Nigerians?

What I said is, if the government meet their own demands on the terms of our bargain, which actually is preventive, then doctors will not be going on strike again for those demands, it is all conditioned on government response and you know government response, NMA cannot decide , for instance if they said they would increase payment at the end of the month and one is not paid anything, what do you do? So your rights have been compromised, what we are trying to say is that the rights of doctors which government has agreed on, if they fulfil those rights there will be no strike even in the future, because the strike usually arise because the government does not always keep to its own side of the bargain.

HR; Your physicians week extended from Ebola to neonatal health, where you trained health workers on how to help babies breathe, why the focus on only FCT?

I’m sure the organizers will have various stages of their programme, I will try not to speak for them but I’m sure they would have had various sectors that they would want to bring in, just that they started with midwives in private hospitals, the next group might be midwives in state government hospitals and those in tertiary hospitals. It cannot be done in one day.

HR; to what extent does it concern the NMA that a lot of newborns are dying from birth aphasia?

It concerns NMA that is why we featured that as part of our programme.

HR; How important is it to reducing under five mortality?

We first of all had to make these people aware of the cause of neonatal deaths, and the commonest thing about newborn death is what we call birth aphasia, that means that when a baby is born, the baby is supposed to cry and when the baby cries, the chest expands, and all the resistance to breathing are taken down and the baby will be able to inhale oxygen and life starts and continues so that few minutes of life is very important, there are conditions that can happen right from the uterus, when the baby still in the womb of the mother that could cause depression or stop respiration that when the baby is born, and the baby does not cry, you will have to resuscitate the baby and put in some resuscitation measures so that the baby can inhale oxygen and come back to life, so that is the whole programme of helping the baby to breathe. It is very important because if damage is done to the brain of that baby, within the first five minutes of birth, that baby will be affected for life in terms of intelligence and neurological development. All these can happen that is why it is very important that neonatal aphasia is prevented in all deliveries.

HR; Do we have a sense of what contribution this prevention of birth aphasia will have on under five mortality intervention?

HR; This resuscitation measures needed to initiate breathing, how wide spread is it in the country’s health facilities?

It is in all labour rooms, where a woman is going to deliver, that is why they are undergoing that training, because the way you manage a child that is born is very important and it is not limited to teaching hospitals and general hospitals, that is a primary resuscitation measure. Some of them are being taught on how to use, some of them will have oxygen that can even help to resuscitate a baby, these are the things that are supposed to be available in every labour room.

HR; What about the use of incubators to save premature babies, why are they not in all health facility?

Incubators are not supposed to be in every delivery room, it should be at least in general hospitals, some private hospitals and tertiary centers, but where ever a baby suffers asphyxia , if it is a premature baby, there  has to be a transfer to where those incubator are.

HR; What about the risk of tetanus or other infection at the time of transfer?

If a woman is seven months pregnant, you already know it is going to be premature, you get everything ready, as soon as the baby is born you transfer to the center, where neonatologists, trained specialist and incubators are available, the ideal thing is that neonathologists should be in charge of incubators not even general practitioner.

HR; Is the NMA considering convincing its members to work in rural communities?

It is a problem in Nigeria now, we don’t have enough doctors, and we have mal-distribution of doctors all wanting to be in teaching hospitals, and the rural areas are abandoned, again the government is working on schemes that will make it possible for doctors to work in local hospitals. I learnt that local governments are now going to operate different from the states, because when the local government are completely under the state government, State government don’t even finance local government health centers at all. The primary health center is the first port of call to people and that why people are just running to teaching hospitals all the time. Now when the local governments start spending their vote themselves, they will resuscitate services that are in their own local hospitals and people will now have access and doctors will be able to move into those places because facilities will be there and they will be able to gain satisfaction  to practice there right now if you go there, there is nothing happening there, they don’t give them funds and one must bow down to the will of his  state governor before he can do anything, so the local government arm of the health sector is totally paralyzed but with the recent amendment, maybe there will be a change on that.

12 years and we are still writing Health