The Presidential Task Force (PTF) on COVID-19, says Nigeria is yet to reach the “peak” of COVID 19 infections. The chairmen of PTF and Secretary to the Government of the Federation (SGF) Mr Boss Mustapha, disclosed this at the COVID-19 daily news conference on Monday 1st June 2020  in Abuja according to NAN report.

He said it was necessary to restate to the citizenry, that Nigeria had not reached the peak of confirmed cases, adding that the battle against COVID-19 was a long-term battle.

He urged Nigerians to pursue a strategy that would aid the sustainable control of the spread of the disease, stressing that risk communications and community engagement should remain top priority.

He added that precision approached to containment and management should be adopted based on the overall assessment, including available data on the public health considerations and resultant economic impacts. According to him, the PTF is of the opinion that Nigeria is ready to allow science and data determine her cautious advancement into the second phase of the eased lockdown for a period of four weeks. 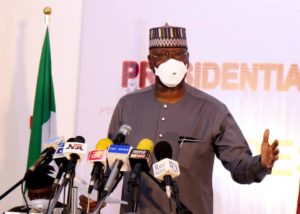 “It is the consideration of the PTF that while Nigeria’s confirmed cases have increased in the period under review, the following factors should inspire confidence in the response….majority of the confirmed cases are in a handful of local government areas  in the country as 20 out of the 774 LGAs nationwide account for 60 per cent of the cases,” he said.

He said there was an opportunity to concentrate efforts in the high-burden areas, adding that the federal agencies and state governments were working together on the promotion and utilization of guidelines on case management. According to him, there is increased capacity to detect, test and trace those infected with the virus as 29 testing laboratories have been activated, with Bauchi being the latest addition. He added that the test count nationwide had exceeded 60,000, stating that a shift in focus to community engagement and enhanced risk communication was imperative.