The recent announcement by the World Health Organisation (WHO) declaring Nigeria free from the longtime dreadful polio endemic may soon resurge in the absence of provision of adequate finances by the government to sustain intervention on Routine Immunization in the country.

As reported by WHO, in 2012, Nigeria accounted for more than half of all polio cases worldwide. This was followed by a concerted effort by all levels of government, civil society, religious leaders and tens of thousands of dedicated health workers have resulted descending proportional drops, and subsequent eradication of polio by 2015. Efforts to completely eradicate polio in Nigeria resulted in immunization of every child under five across the country with vaccine multiple times.

Indeed, getting all Nigerian children immunized was a huge challenge, as it took the government, thousands of volunteers and help from mostly international donors. It is noteworthy that polio eradication would be one of the greatest achievements in Nigeria’s history, and if the effort sustained will impact positively in the future generations. To avert a fresh onslaught of the disease and sustain Nigeria’s new status, it is strongly recommended that the governments and stakeholders at all levels must be encouraged not to relax the tempo of their interventions against the disease.

While Nigerians were largely involved in the mobilisation and education efforts, the financial burden of polio eradication was largely borne by international donors. According to Stears Report, Nigeria’s total contributions to the Global Polio Eradication Initiative amounted to roughly $111 million between 2006 and 2013; and the estimated funding requires for eradication efforts in Nigeria was $170 million for 2016. 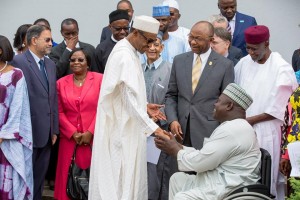 Henceforth, government has the responsibility to continue administering the polio vaccine to any new born baby and these vaccines are reportedly more expensive. Consequently, as the federal government presents N6.3 trillion 2016 budget proposal to the National Assembly, there are serious public outcries by various stakeholders advocating for effective child and family health in Nigeria such as Community Health Research Initiative (CHR) under the aegis of Partnership for Advocacy in Child and Family Health (PACFaH) agitating for adequate finances for immunization to ensure sustainability and avert future resurgence of polio virus.

From the observations of CHR, Nigeria has recorded significant progress in reducing childhood mortality, and vaccines have been a significant contributor. “New vaccines such as the Pentavalent vaccine have been introduced and Routine Immunization (RI) coverage has improved significantly from about 48% to 50 % in 2012 and 2013, to coverage of 87% nationwide in 2014”.

According to CHR, the Government of Nigeria’s plans to introduce 5 new life-saving vaccines between 2014 and 2018, and the updated Routine Immunization program can save 1.2 million lives between 2015 and 2020, compared with the current program. The organization warned that delaying introduction of the new vaccines by one year will result in 5,000 more deaths over 2015 and 2020; delaying by two years would result in 50,000 more deaths within the same period; and choosing not to introduce or sustain key vaccines will result in fewer lives saved.

More importantly, it must be emphasized that Nigeria’s current polio vaccination strategy mainly utilises the oral polio vaccine (OPV) because it is cheaper and more easily deployed than the injectable Inactivated Polio Vaccine (IPV). However, reports have revealed that in many polio-free countries, use of the OPV has been withdrawn as it does not prevent the disease from being transmitted through faeces in areas with poor sanitation.

As Nigeria faces challenges in both proper sanitation and clean drinking water, a recent study by the Pharmaceutical Society of Nigeria (PSN) has disclosed that almost 63.2 million people lack access to safe water; over 112 million people also lack access to adequate sanitation (i.e. two thirds of the population); and over 97,000 children die every year from diarrhoea caused by unsafe water and poor sanitation in Nigeria. Poor access to safe drinking water remains a key contributing factor to the high rates of diarrhea and related child deaths.

It therefore becomes imperative that Nigerian government strategically adopt the IPV to bypass the future hurdles, and ensure adequate budgetary provision in the proposed 2016 Appropriation and beyond to effectively sustain intervention on immunization.